Meanwhile, the men and women at the bottom of the Fyffes supply chain live in precarity with each new harvesting season, as they fear being sacked for speaking up against labor violations. Fyffes pineapple subsidiary in Costa Rica (Anexco) and its melon subsidiary in Honduras (Suragroh) have been found to be in violation, among others, of failure to pay minimum wage, overtime and weekends; long and extensive working hours; exposure of workers to hazardous agrochemicals; failure to make social security payments; and systematic intimidation against union members.

During my recent fact-finding trip to Central America, Ricardo Centeno Soza, an Anexco pineapple worker in Costa Rica, told me that local management publically humiliates and punishes unionized workers to send a clear message to nonunionized workers: “They look for ways to discriminate against those that are in the union so others can see that they treat us like dirt.” 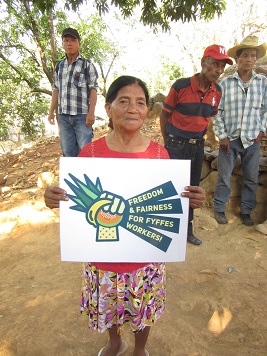 Meanwhile, at a melon plantation in Honduras owned by Fyffes, Maria Gomez, 65, (pictured on the right) reflected on how the company short-changes workers by failing to pay legally required benefits: “They never contributed to social insurance and now I will not be able to retire or finally rest after so many years (nearly 30) spent on the plantation. I have to continue looking for work to survive.”

She is one of the 35 union members that currently find themselves unemployed after they were not rehired for the new season that began in November, despite the company hiring new and inexperienced personnel.

For the past year and a half, the Honduran trade union federation FESTAGRO has made numerous attempts to open a space for dialogue between the workers and the local management. However, Fyffes’ subsidiaries across Central America have consistently refused to recognize the unions (STAS in Honduras and SINTRAPEM in Costa Rica) and have deliberately blocked collective bargaining processes.

At the corporate level, Fyffes’ Chairman David McCann said he “would not address the issue” when asked what he planned to do to improve working conditions for his employees in Honduras and Costa Rica. The overt indifference for labor rights from the executive level down to the local management reflects the anti-union nature of the company.

Fyffes supply chain practices are at odds with its membership in the Ethical Trading Initiative (ETI), an alliance of companies, NGOs and trade unions that commits to respecting the right to collectively bargain, paying living wages, and prohibiting harsh or inhumane treatment. Indeed, Fyffes has been called out by the International Union of Food Workers (IUF) and UK NGO, Banana Link in an official complaint to the ETI in April 2016 for failing to respect workers’ rights in Honduras and Costa Rica.

Fyffes’ subsidiary in Costa Rica, also called Ananas Export Company S.A., has a “Best Practices” policy posted at their headquarters that pledges to guarantee “Safe and Sanitary Working Conditions.” However, a pineapple worker that asked to remain anonymous explained that “The chemicals seeps into our face, mouth and eyes. It is so bitter and the odor is so strong…Sometimes they spray at night and we are working the fields by 10 am the next morning.”

Under the ETI Base Code, Fyffes is required to guarantee respect for workers’, union, and human rights. But USLEAP witnessed the contradictory reality on a recent visit to the Suragroh melon plantation in Honduras. When Maria Gomez tried to give the local management a letter explaining her grievances, the guards threw the letter back out the gate window. After several attempts were made to deliver the letter, a company car sped past the delegation and threw the letter out of the car window and onto the street.

Fyffes benefits from its membership in the ETI as consumers around the world shop for more ethically sourced products. Yet the abuses suffered by those at the bottom of the supply chain contradict the image of corporate social responsibility the company wants to project.

In order to hold Fyffes accountable, USLEAP has joined an international campaign, “Freedom and Fairness for Fyffes Workers” which aims to raise global awareness of the serious situation faced by hundreds of Fyffes workers in the melon plantations in southern Honduras and pineapple plantations in Costa Rica.

The campaign is asking Fyffes ensure that local plantation management: 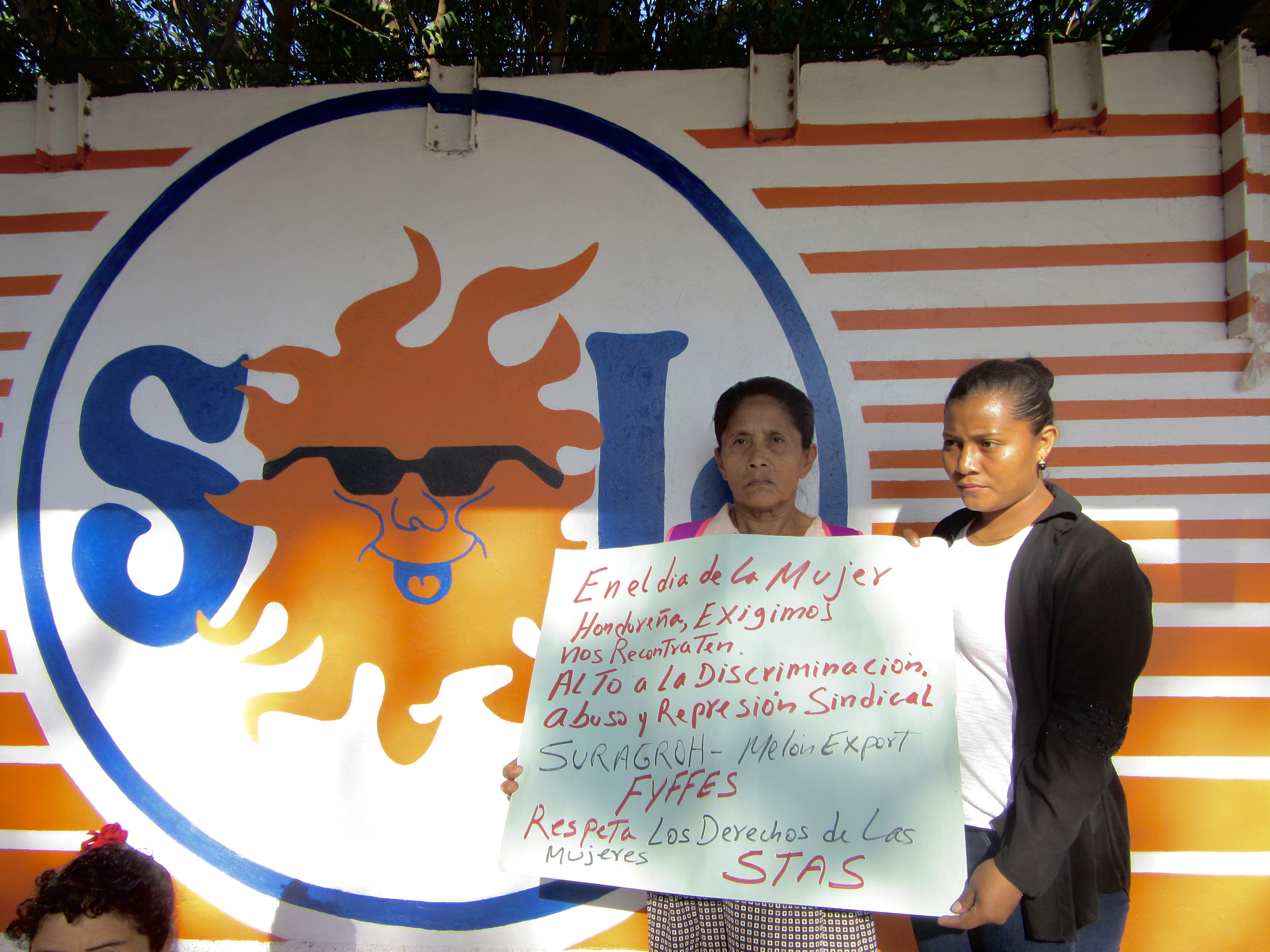 While Fyffes is an Irish company, recently bought by Japan’s Sumitomo, most of the melons grown and cultivated by the majority-women workforce in Honduras end up in our grocery stores in the United States. You might have bought the melons, pineapples, or bananas before with this SOL logo.

As consumers, we have a right to know that the fruit we buy is not harvested in violation of basic human rights. As the U.S. buyer and distributor to Fyffes, Sol Group Marketing is in a unique position to influence Fyffes in this regard.

When Cruz Urvina Lopez was asked how the American consumer could support their struggle, he responded by saying “The pineapple that the consumer eats, they should know that they are consuming the sacrifice we make with our lives.”

Tomas Membreño, president of FESTAGRO spoke about the importance of affiliating to the union: “There is no other way to have our rights respected. We tried to talk, negotiate and reason with management in other ways but they continue violating our rights.”

Ramon Barrantes, president of the Coordinating Body of Latin American Banana and Agro-industrial Unions in Costa Rica (COLSIBA-CR), affirmed that, “we do not want to destabilize the company, we just want to have basic labor rights.”

USLEAP will be launching a campaign this spring asking grocery stores, activists, and other allied organizations to demand that the Florida-based Sol Group Marketing provide a living wage and freedom of association to its workers.

We stand in solidarity with our compañeros y compañeras in Central America that put their lives on the line to speak out against labor violations on Fyffes plantations. USLEAP seeks a global economy in which workers are treated fairly, paid a living wage, and respected by corporations and governments.

In a final message to David McCann, Lester Vega Saenz said, “My message to him would be to give his workers a chance. An opportunity to a dignified salary that justifies the work we do…so the people can work happily and maybe even more efficiently because we would know we are being fairly compensated.”

To get Fyffes to listen up, we need to make sure that supermarkets in the US send them a strong message. And for that to happen we need your help. As a first step, we need to track which supermarkets the melons, pineapples, and bananas are going to. In order to help us do that, make sure to check for the Sol logo next time you visit your local supermarket and fill out this form.