Women Leading Change: From Forced Labor to Freedom of Association

Join us for our annual event where GLJ-ILRF lifts up the voices, experiences, and visions of labor rights defenders on the frontlines of the fight for decent work and social justice. Speakers include U.S. Department Secretary of Labor Julie Su along with women union leaders from around the world who are creating innovative models to defend labor rights and build worker power in food processing, manufacturing and agriculture. Their work shows how workers are organizing around the world even in sectors that have historically relied on forced labor with women's leadership at the front!

One Year On, We Remember Garment Worker Leader Jeyasre Kathiravel as We Push for Groundbreaking Agreement to Prevent Gender Based Violence 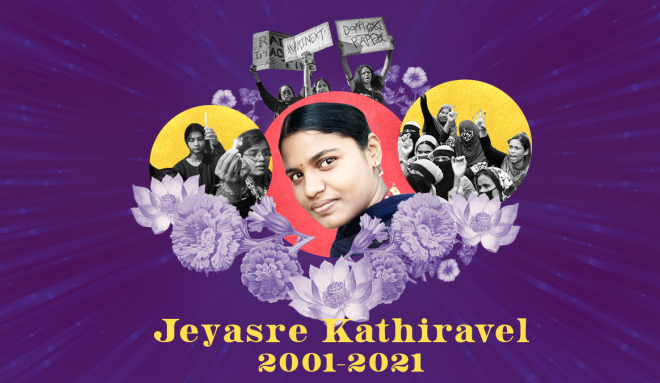 The following is a statement from GLJ-ILRF, Asia Floor Wage Alliance and the Tamil Nadu Textile and Common Labour Union (TTCU):

This week marks the one-year anniversary of the horrific murder of Jeyasre Kathiravel, a young Indian Dalit woman, a student and an organizer against gender-based violence and harassment at a large Indian garment manufacturer sourcing to major U.S. and European fashion brands. Jeyasre was murdered by her supervisor after facing months of sexual harassment.

On Wednesday, July 21st, 2021 GLJ-ILRF’s Executive Director, JJ Rosenbaum testified at the Subcommittee on Trade of the U.S.

“The difference between staying in Honduras and leaving for the United States is not whether you have a job or not.

Thailand Downgraded in U.S. Trafficking in Persons Report Due to Failure to Address Forced Labor of Migrant Workers