ILRF today issued a warning to companies and consumers that Indorama Corporation is currently under investigation for violations of U.S. law related to its operations in Uzbekistan. The investigation included the U.S. Customs preventing a shipment of yarn produced in Uzbekistan by Indorama from entering the port of Los Angeles in October 2013. The U.S. government has listed cotton from Uzbekistan as a prohibited good made by forced child labor since 2009. Bringing goods made “in whole or in part” with forced labor into the United States, including products containing cotton from Uzbekistan, is illegal under the terms of the Tariff Act [19 U.S.C. §1307] of 1930.

“Forced labor is a crime,” said Brian Campbell, ILRF director of policy and legal programs. “For those investing in the cotton system, like Indorama Corporation, the potential for liability is very clear.  U.S. law prohibits any person from knowingly benefiting from forced labor. Those that do face up to 20 years in prison.”

Indorama Kokand Textile’s sole source of cotton yarn and cotton fabric is from its processing facility in Uzbekistan. The company is a joint venture company with the National Bank of Uzbekistan, with Indorama Corporation as the majority shareholder, established in July 2011. Indorama Kokand Textile is a division of Indorama Corporation, a group of companies headquartered in Singapore known for its Spandex yarns and fabric and yarn brands, including Kokand’s signature brand, Veola.

Cotton from Uzbekistan is produced in a state-order and forced-labor system. If Uzbek farmers fail to meet the government-mandated cotton production quotas, they risk losing their lease to farm the land, criminal charges and physical abuse. The Uzbek Government also forcibly mobilizes 16-17 year-old students, university students, teachers, health-care and other public-sector workers, private-sector workers and pensioners to harvest the cotton each fall.

“We want to inform apparel companies that sourcing from Indorama risks linking their brand to a company with deep ties to the forced-labor production system of the Uzbek government,” said Matt Fischer-Daly, coordinator of the cotton campaign, a global coalition of human rights, labor, investor and business organizations dedicated to ending forced labor in the cotton sector of Uzbekistan.

ILRF advised that companies wishing to limit their exposure should cease doing business with Indorama pending the outcome of the investigation. 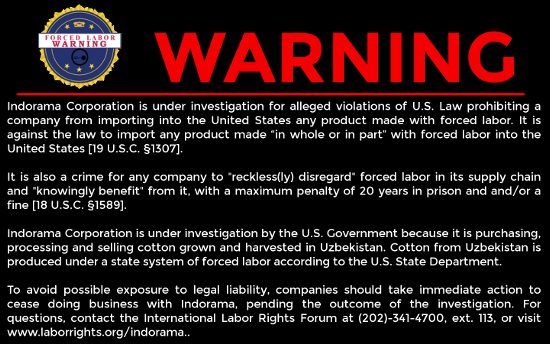