Hold your keys in your hand. Stick to that street, not this one, it has more lights. Don’t go down that block, whatever you do – there’s a group of gamblers on the corner ready to scream drunkenly at you as you pass by.

It’s a dance every woman around the world is familiar with: minimizing your risk and exposure, keeping yourself safe, while trying to get from point A to point B. For garment workers in Cambodia, that dance takes place nearly every night. So much so that the Center for Alliance of Labor and Human Rights (CENTRAL), keeps a crowdsourced map up on the wall. Workers who come through the center for trainings and meetings add to the map. They draw arrows down the safest paths, and mark hazards with orange dots. 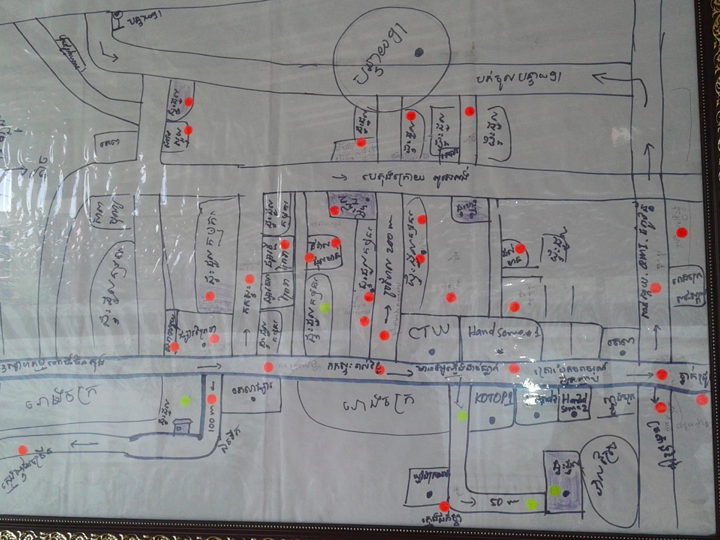 Employers have long argued that the existence of violence and harassment during commutes doesn’t mean they have a responsibility to address it. They are quick to say they’re not responsible for anything that happens outside of their physical workplace. Unless the employer provides transportation, workers are on their own to make it to and from work safely.

Even when a safe and reliable transit option exists, workers often aren’t given the option to take it. Excessive working hours force many women to leave their homes early in the morning before daybreak, and to return home long after nightfall. The “world of work”, which the proposed title for the International Labour Organization’s new Convention refers to, necessarily involves what happens on transportation to and from the workplace; for garment workers, commuting is not an optional part of the job.

In Cambodia, where garment workers often commute from employer-provided housing to the factories, the fraught streets and long hours put women at risk. In a report from Global Labor Justice and Asia Floor Wage Alliance, a woman who works in an H&M supplier factory in Cambodia described the walk home after dark. “It is not well lit. There are some street lights, but they are placed far apart. There are dogs everywhere and they bark. Theft and purse snatching is also common. Last week, one of my friends was robbed. Her purse was stolen. We are also harassed by men on the street as we walk home from work.”

Every country has its own version of the gauntlet. In Bangladesh, where cars and motorbikes are almost always out of reach for garment workers, crowded public buses are the only option for workers whose commute is longer than walking distance. During a focus group on gender-based violence that I co-facilitated in Bangladesh, many women recounted vivid memories of violence and harassment on the buses they take to and from work. “I have been groped on the bus more times than I can count,” one participant shared. “Men grab at all parts of my body. They unzip their pants and force themselves against my back, or into my hands. They know it’s too crowded to run away or to protest.”

The ILO is unique in that each of its international labor standards is born of mutual responsibility. The tripartite structure acknowledges that each party plays a role in creating a safe and dignified workplace – government, unions and employers alike. But in a situation where employers arguably have the most immediate ability to influence the situation, the other two parties can’t remediate this issue on their own. The scourge of gender-based violence that has touched more garment workers than it hasn’t can only be eradicated with a holistic solution that tackles the root causes, and the new binding ILO standard on Violence and Harassment in the World of Work must be part of the solution by including the commute within its scope.

The impacts of gender-based violence while in transit to the workplace don’t stop once a worker reaches the factory. Any person of any gender who has been grabbed without their consent, or harassed and humiliated in front of a crowd, knows that the aftershocks last much longer than the incident itself. And, when the experience is compounded by discrimination and harassment based on gender inside the factories, the impact can multiply greatly.