A Bangladeshi labor rights activist and former apparel worker was tortured and murdered last week in Dhaka. His body was dumped outside of the capital city and was found by local police last Thursday.  According to the police report, Aminul Islam's body bore signs of brutal torture. Aminul's family, who had been searching for him since he disappeared last Wednesday, identified him on Saturday from photos appearing in local newspapers. Labor rights organizations in Bangladesh and the United States believe the killing is associated with Aminul's work on behalf of apparel workers who sew garments for suppliers to major U.S. retailers and brands.

Aminul had worked for several years as a labor rights organizer and advocate. His organization is among the most prominent labor rights groups in the country. Levi Strauss called BCWS "a globally respected labor rights organization that has played a vital role in documenting and working to remedy labor violations in the apparel industry in Bangladesh." The Bangladeshi Center for Worker Solidarity (BCWS) was featured in a recent ABC TV News story exposing the relationship of U.S. brands to a sweatshop factory fire in Dhaka that killed twenty-nine workers last year, and describing the repression of labor rights advocates.

BCWS and its staff have been the target of a campaign of harassment by the Bangladeshi government and apparel factory owners for two years. The organization's license to operate was revoked and Aminul and two of his colleagues were jailed in 2010. Their release was secured only after international pressure. 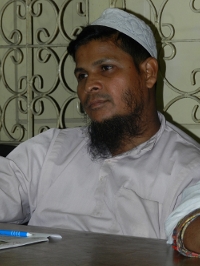 Aminul had disappeared Wednesday evening on his way to meet a worker who had called him seeking assistance. Aminul's family and friends searched for him until Saturday, when his wife recognized a photograph of his body, published in a local newspaper.

Aminul had been detained by officials of the National Intelligence Service (NSI) in June 2010. According to Aminul, he was subjected to severe and repeated beatings, which his captors said would stop only if he agreed to give false testimony against his colleagues at BCWS. The NSI officials demanded that he write a letter stating that his colleagues were the instigators of recent worker protests, which had resulted in damage to some factory buildings. Aminul refused. While being transported to another location, he managed to escape his captors and went into hiding.

Later that year, Aminul and two colleagues, Kalpona Akhter and Babul Akter, were arrested and jailed on charges of fomenting riots and related acts – charges regarded as baseless by international labor and human rights organizations. They were released only after substantial international pressure on the Bangladesh government and they still face trials.

On Wednesday of last week, after working during the day at BCWS's office in Savar, Aminul went to evening prayers. While there, he noticed a police van parked outside. Fearing harassment or arrest he called a colleague to say that they should close the BCWS office for the day. Aminul then returned to his home. Later in the evening, he received a call from a worker urgently seeking assistance. He left home to meet the worker and was never heard from again.

Labor rights organizations in the U.S. and Bangladesh are calling for a full investigation of the murder and for those responsible to be brought to justice.