Trade union rights are central to preventing forced labor. Industries with strong trade union representation have lower levels of labor abuse, child labor, forced labor, and human trafficking. In Thailand, where migrant workers are legally barred from forming their own unions, labor abuse and exploitation are endemic to the country’s migrant-dominated labor sectors, such as seafood processing and fishing.

Time for a Sea Change compiles analysis of the industry and legal environment to demonstrate that reform will continue to fall short for as long as migrant workers remain without rights to freedom of association and collective bargaining. Without such rights, forced labor and human trafficking will remain prevalent in the Thai seafood industry. The report also provides five case studies of attempts by migrant workers to organize and exercise their rights, where they have faced numerous challenges but also found some success.

THE PROBLEM: Forced labor of migrant workers in the Thai seafood industry

The exploitation of seafood industry workers is the result of global industry efforts to drive down the costs of business, and of national legal frameworks that reflect discrimination and deeply entrenched power imbalances between workers and their employers, and between suppliers and their buyers.

Thailand’s emergence as a leader in global seafood export has generated a high demand for labor in fishing and seafood processing activities. With an aging population and Thais tending to avoid work in these industries due to the poor working conditions and low wages, migrant workers have increasingly filled the demand. This includes more than 200,000 people who have migrated from Myanmar, Cambodia, and Laos to work in commercial processing factories, on fishing vessels, and on aquaculture farms. Companies in the fishing sector have often sought cheaper labor to offset increased costs due to depletion of fish stocks from overfishing, which requires vessels to go further out to sea for longer periods of time.

In 2014, investigative journalists unearthed extreme cases of thousands of fishers on Thai-flagged vessels who had been in situations of forced labor for up to ten years. They had been forced to work up to 22-hour shifts, whipped with toxic stingray tails, maimed, or even killed at sea. They were catching fish used to feed shrimp that were then sold in leading supermarkets around the world. Reports also surfaced of hundreds of shrimp peeling sheds where migrant workers, including children, were brutally beaten, handcuffed to other workers, and threatened with being shot to force them to continue their work.

In 2014, the U.S. downgraded Thailand to the lowest possible status in its annual Trafficking in Persons Report. In 2015, the European Commission issued a ‘yellow card’ warning to Thailand over its failure to combat illegal fishing. U.S. and global union federations filed complaints through international mechanisms demonstrating links between labor exploitation and denial of workers’ rights to freedom of association and collective bargaining.

In response to these pressures, the Thai government overhauled its fishing sector monitoring and management regimes and continued a decades-old process of policy reform to manage migration and eliminate human trafficking. These reforms have had mixed results in reaching their stated objectives and the absence of meaningful engagement with worker organizations has greatly hampered their success. In light of these shortcomings, labor rights abuse, forced labor, and human trafficking continue to be reported regularly in Thailand’s seafood industry.

The need for forced labor prevention

Prevention of forced labor and human trafficking is far more effective than retroactive responses. Once workers end up in situations of exploitation, court proceedings and rehabilitation of workers are needed. Forced labor does not always include signs of physical force. It may include debt, retention of identity documents, and restrictions on movement. The most effective way to protect workers against forced labor is to address labor rights violations, no matter where they lie on the continuum.

Workers are vulnerable to forced labor if they do not know their rights, are excluded from labor protection laws, lack access to complaint mechanisms, or are too afraid to speak out. Employers and recruiters exploit specifically those workers who are less powerful than they are and when they can do so with impunity. 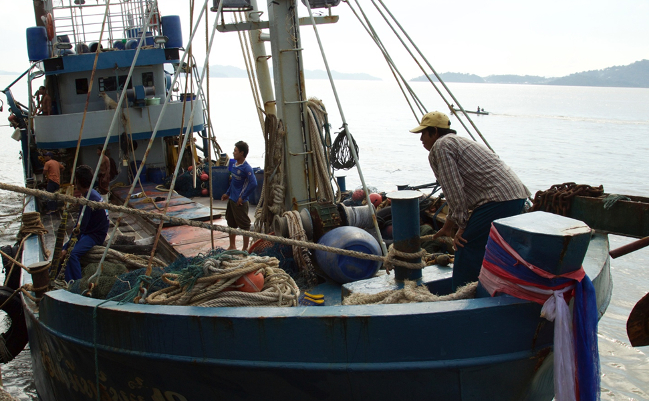 One of the most effective ways to prevent forced labor is by guaranteeing workers full rights to freedom of association and collective bargaining. These rights comprise the first of the International Labour Organization’s four core labor standards, which are minimum requirements that should be a right for every worker around the world regardless of whether or not their government has signed the ILO conventions. 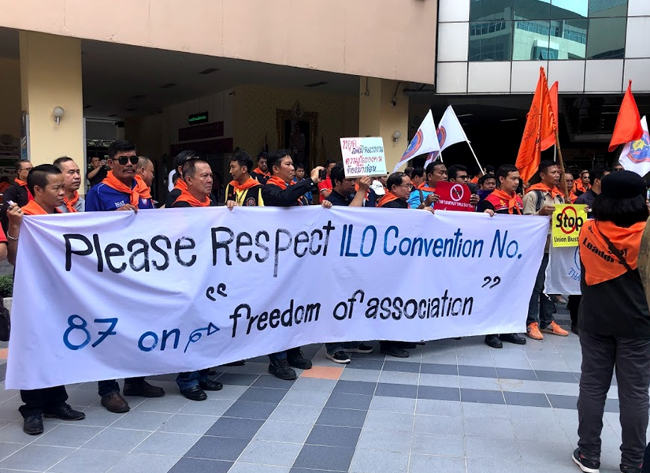 The lack of trade union rights for workers in Thailand

Approximately 75% of Thailand’s 38 million workers are not guaranteed full rights to freedom of association and collective bargaining under law. Thailand has a trade union density of 1.6%, among the lowest of any country in the world.

The country’s nearly four million migrant workers comprise 10% of the workforce. They are legally barred from forming unions or serving as union leaders. Thai workers have these rights, making the law explicitly discriminatory by creating a different standard for migrants and leaving them vulnerable to exploitation. 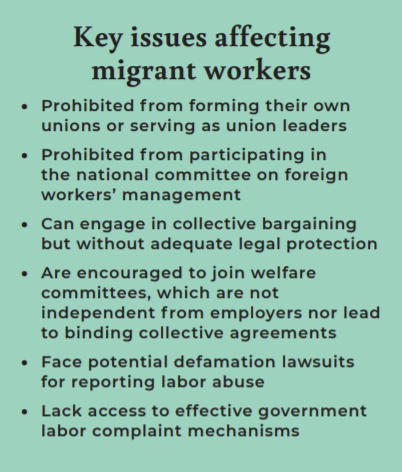 There are very few Thai nationals employed in the low- or semi-skilled jobs in commercial seafood processing and fishing, meaning there are very few workers who are able to register or lead a union. Aquaculture farm workers do not have the right to form or join unions, as their work is seasonal. The combination of these legal barriers makes it nearly impossible for migrant workers in each segment of the seafood industry to exercise their rights to freedom of association and collective bargaining.

Foreign migrant workers can engage in collective bargaining; however, workers who undertake organizing or bargaining activity outside of a registered union do not have adequate legal protection against termination. If a migrant worker’s contract is terminated, there is a strong likelihood that they will be deported and are not typically willing or able to take this type of risk.

Migrant workers are able to join other types of worker bodies under Thai law, such as employee or welfare committees. Yet, unlike unions, these bodies are not independent from employers and do not lead to binding collective bargaining agreements that workers can use to protect themselves and hold employers accountable. Problematically, seafood companies have claimed that they are upholding rights to freedom of association and collective bargaining because they have instituted welfare committees in their workplaces.

The Thai government and companies have filed civil and criminal charges against Thai trade union leaders, migrant workers, and other human rights defenders for union organizing initiatives, collective bargaining, or reporting or publicizing labor abuse. This environment is rife with anti-union discrimination and the threat of defamation lawsuits serves to frighten and silence would-be organizers and activists.

CASE STUDIES: Worker organizing within the constraints of the law

The Fishers’ Rights Network (FRN) is a democratic, representative union of more than 2,000 migrant fishermen in Thailand. Established in 2017 by the International Transport Workers’ Federation (ITF), FRN set up organizing centers near the major fishing ports in Songkhla, Ranong, and Trat provinces. FRN’s work has led to the distribution of medicine and first-aid kits on boats throughout the country. They have held employers accountable to provide salary payments and social security benefits and successfully advocated for the government to raise the minimum wage for fishers. Crucially, FRN’s work has led to consciousness-raising among fishers about the benefits of trade unions.

Since 2016, the State Enterprises Workers’ Relations Confederation (SERC) has been organizing migrant seafood industry workers in two provinces. In Songkhla, SERC organized migrant workers from Myanmar across five seafood processing factories. This led to the formation the Southern Seafood Workers’ Group (SSWG), which identifies workplace, labor protection, and welfare issues across the factories and discusses issues with local government officials. In Chonburi, SERC organized Cambodian fishermen and their wives, leading to the formation of the Samae San Fishermen’s Alliance. 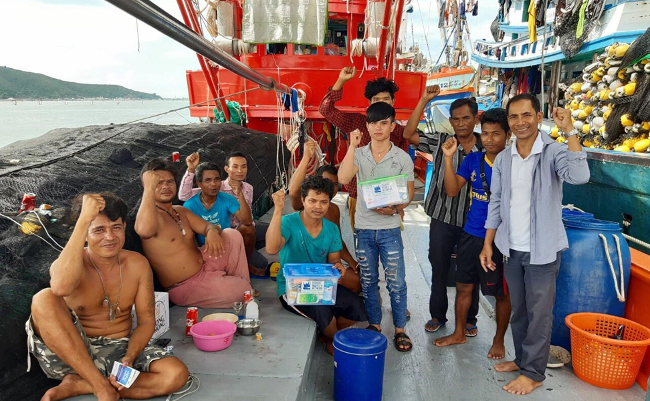 In January 2017, the Migrant Workers Rights Network (MWRN) assisted more than 2,000 migrant workers employed by a tuna processor to organize and submit a collective demand to bargain for improved employee benefits. This was a unique attempt to organize such a large number of migrant workers to submit a collective labor demand in accordance with Thai law and an effort to advance dialogue between workers and employers in the seafood industry. Workers faced resistance and were able to win only a small portion of their demands.

MWRN has sought to strengthen the welfare committee system in three workplaces in Samut Sakorn Province, working since 2016 with Thai Union Group, a seafood processor. Workers elected representatives, and the committees led to some workplace improvements, including longer breaks and parking for workers’ vehicles. Yet, these committees are not a substitute for the work that could be done through independent worker organizing and collective bargaining. 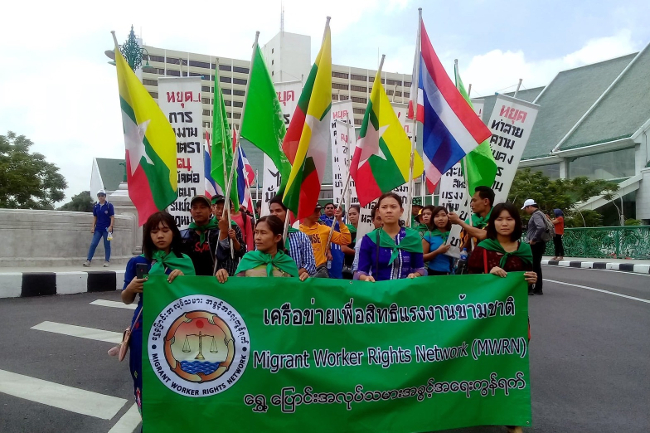 Affording migrant workers their internationally recognized rights to freedom of association and collective bargaining is necessary to address the power imbalances that drive labor exploitation. Governments and corporate actors have a responsibility to respect and protect these rights and a strong interest in doing so if they seek to end forced labor in the Thai seafood industry.

Key recommendations to the Thai government