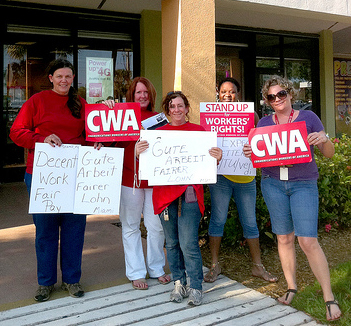 ILRF honors the Communications Workers of America for its innovation in transnational organizing. CWA has taken the forces of globalization head-on, forging crucial ties with allied unions around the world that have assisted in organizing efforts.

Founded in 1938, the Communications Workers of America has grown from a union of telephone workers to an international union representing 700,000 in the US, Canada and Puerto Rico. Today, CWA represents workers in telecommunications, the airline industry, media, public service, education and  health care, law enforcement and manufacturing

CWA has been on the cutting edge of transnational organizing since 1991, expanding its international programs to address the growth of globalization. Strategic partnerships with unions around the world have made this work possible. One of the longest-running partnerships is with the Sindicato de Telefonistas de la Republica Mexicana (STRM), the independent union representing telecom workers in  Mexico. Together, these two unions worked to support call center workers, journalists and other workers who wanted union representation, and to file complaints under the North American Free Trade Agreement for violations of that trade deal’s side agreement on labor.

CWA continues to demonstrate the power of transnational organizing with two current campaigns: